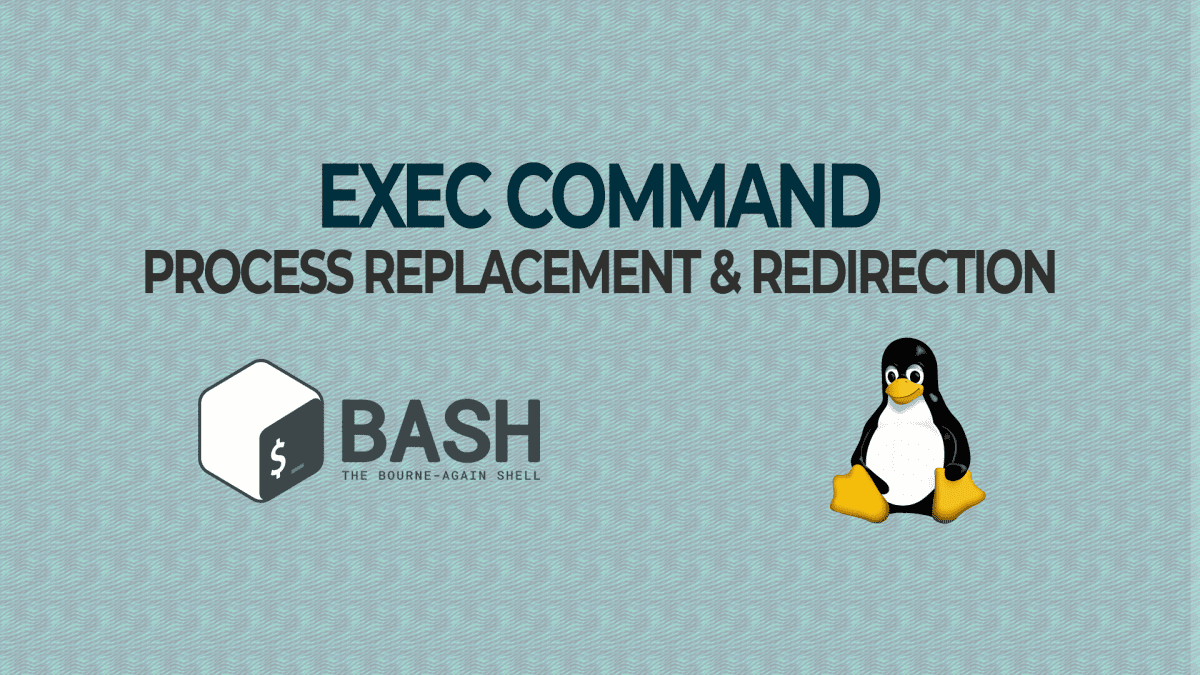 The Linux exec command is a bash builtin and a very interesting utility. It is not something most people who are new to Linux know. Most seasoned admins understand it but only use it occasionally. If you are a developer, programmer or DevOp engineer it is probably something you use more often. Lets take a deep dive into the builtin exec command, what it does and how to use it.

Basics of the Parent / Child Process

In order to understand the exec command, you need a fundamental understanding of how shells create (fork) processes. When you open a terminal window a program is started, in my case gnome-terminal-server. That program creates a new "bash" process and gives you a command prompt. Most commands entered in the terminal window create a new child process.

Below is an example. I opened a terminal window which started the gnome-terminal-server. The Gnome terminal process created a bash process and gave me a prompt. Below you will see the PID (Process ID) of the Gnome Terminal is 14684. If you look closely as the bash process you will see it's PPID (Parent Process ID) is the same. This means that it is a child process of the gnome-terminal-server.

Every time you run a command in a terminal, it creates (forks) a child process and runs the supplied command.

That is a very basic example of how shells create child processes to execute commands. I will leave links to more information about child processes and sub-shells in the resources section at the end of this article. Now, on to the main event, the exec command.

What the Exec Command Does

In it's most basic function the exec command changes the default behavior of creating a sub-shell to run a command. If you run exec followed by a command, that command will REPLACE the original process, it will NOT create a sub-shell.

In the following sections we will expand on both of these functions and try to demonstrate how to use them.

How to Use the Exec Command with Examples

Let's look at some examples of how to use the exec command and it's options.

If you call exec and supply a command without any options, it simply replaces the shell with command.

If the -l option is supplied, exec adds a dash at the beginning of the first (zeroth) argument given. So if we ran the following command:

It would produce the following output in the process list. Notice the highlighted dash in the CMD column.

The -c option causes the supplied command to run with a empty environment. Environmental variables like PATH, are cleared before the command it run. Let's try an experiment. We know that the printenv command prints all the settings for a users environment. So here we will open a new bash process, run the printenv command to show we have some variables set. We will then run printenv again but this time with the exec -c option.

In the example above you can see that an empty environment is used when using exec with the -c option. This is why there was no output to the printenv command when ran with exec.

The last option, -a [name], will pass name as the first argument to command. The command will still run as expected, but the name of the process will change. In this next example we opened a second terminal and ran the following command:

Here is the process list showing the results of the above command:

As you can see, exec passed PUTORIUS as first argument to command, therefore it shows in the process list with that name.

The exec command is often used for redirection. When a file descriptor is redirected with exec it affects the current shell. It will exist for the life of the shell or until it is explicitly stopped.

If no command is specified, redirections may be used to affect the current shell environment.

Redirect all standard output (STDOUT) to a file:

Open a file as file descriptor 6 for writing:

In this article we covered the basics of the exec command. We discussed how to use it for process replacement, redirection and file descriptor manipulation.

In the past I have seen exec used in some interesting ways. It is often used as a wrapper script for starting other binaries. Using process replacement you can call a binary and when it takes over there is no trace of the original wrapper script in the process table or memory. I have also seen many System Administrators use exec when transferring work from one script to another. If you call a script inside of another script the original process stays open as a parent. You can use exec to replace that original script.

I am sure there are people out there using exec in some interesting ways. I would love to hear your experiences with exec. Please feel free to leave a comment below with anything on your mind.

Find Command - Search for files on the Linux Command Line