Cron vs Anacron - Different Ways of Scheduling Jobs on Linux 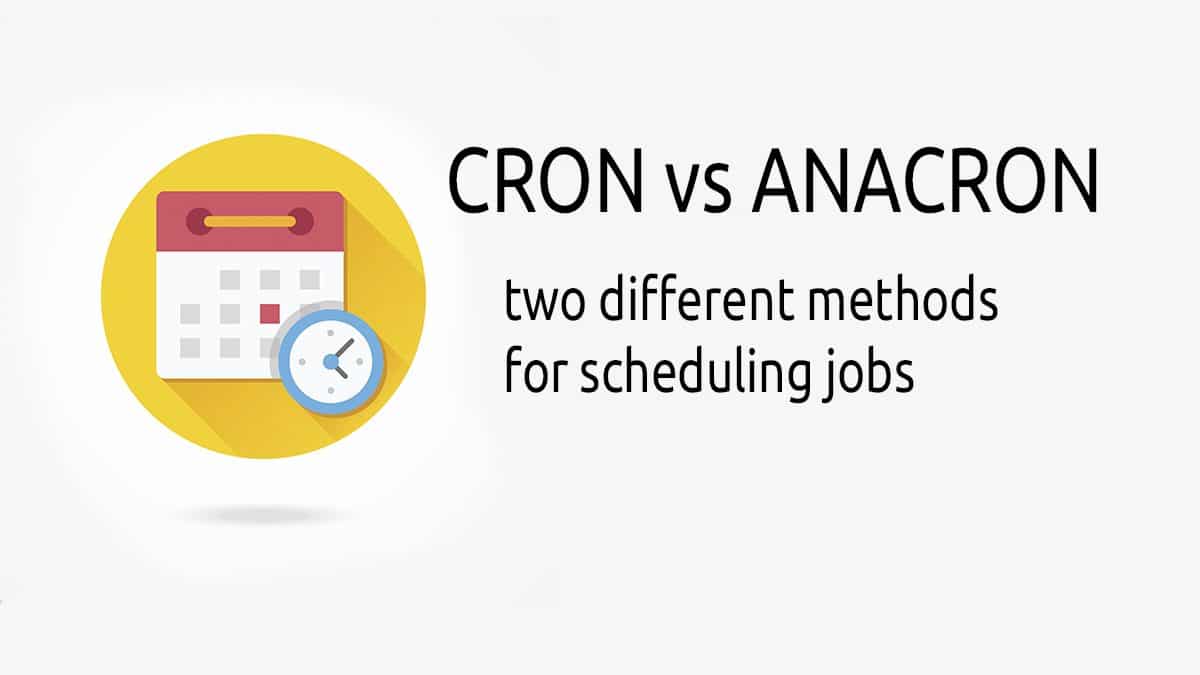 As a system administrator, you often need to run a particular task repeatedly and at a particular time without any user intervention. Tasks such as backups, cleaning temporary files, and other system maintenance fall under this category. Fortunately, there are several different ways to automate these tasks on a Linux system. In this article we will discuss using cron and anacron to automate tasks. We will outline their differences and the basics of how to schedule jobs with each.

NOTE: For one time jobs (as opposed to reoccurring jobs) see the at command.

Cron jobs are suitable for servers that run 24/7 continuously, while the Anacron is better suited for desktops and laptops that are powered off when not in use. Furthermore, cron is more granular and can run jobs at a very specific time while anacron has a minimum time interval of once per day (daily).

Crond is a daemon in Linux OS used for automation of recurring jobs. It is a background process that works by waking up every minute to check whether there is any job scheduled at that minute. If so, it runs the job otherwise stays inactive. The cron daemon checks for scheduled jobs the /etc/crontab file, /var/spool/cron, and /etc/cron.d directories and executes them if the scheduled time matches the system time.

Scheduling a Job With Cron

In cron you can specify a job to run at a specific time, date, and intervals with a minute as the minimum unit of time.

A root user can configure system wide cron jobs by editing the /etc/crontab file with a text editor like nano or vi:

Non-root users can define their cron jobs in their own crontab file using this:

In order to schedule a cron job, add an entry in the crontab file using the following syntax:

Each of the * in the above syntax corresponds to the following:

An asterisk means all values. Let's take a look at an example.

The following entry will set a backup job to run (by running backup_script.sh) at the 3:00 am on the 30th day of every month.

You can view the crontab file for the current user with the following command:

To view system defined cron jobs, use the cat command as follows:

The cron daemon does not run the scheduled job if the system is off at the specified time interval. It expects the system to be running all the time. For instance, you have scheduled a backup job at 8 o'clock and your system was off at that time, the job will not execute. Therefore, cron is mostly suited for servers which run continuously 24/7 and do not shut down. It is not suitable for use in desktops and laptops which are routinely powered down when not in use.

Unlike cron, anacron does not expect the system to be continuously running all the time and therefore is better suited for desktop and laptops.

When anacron runs, it checks if the job was last executed in the specified amount of time. If it has not been because the system was off (or any other reason), it will run the job.

For example, let's assume you set a backup job to run daily in anacron. If you shut your system down for 3 days, at the next boot anacron will recognize that that job hasn't been run in the last day and execute the job.

Anacron is not a daemon and therefore relies on other mechanisms to run. On some systems it runs from a systemd timer unit, while other times it relies on the cron daemon itself.

Anacron does not work with the exact time and date. Instead, it works with a period which is specified in days. These days can be represented in several formats including daily, monthly, and weekly.

The /etc/anacrontab is the main configuration file where the schedule jobs are listed. For each job, anacron checks whether the job has been executed in the defined period. If not, it runs the job and stores the timestamps of the job in the /var/spool/anacron file.

You can edit the anacrontab file with sudo access or as the root user.

Non-privileged users (without sudo or root access) can create their own, user specific anacron instances.

First, create a .anacron directory inside your home folder with two sub-directories (etc and spool) to match the system configuration.

Then create a new file to hold your user specific anacron jobs, like so:

The jobs in the anacrontab file are listed in the following format:

The other jobs listed in this file are the system defined entries that execute all the jobs in /etc/cron.* directories.

Although Anacron runs automatically at boot, but you can also run it manually as follows:

To view the directory where the time stamps for all the files are stored, you can run the following command:

To force the execution of jobs, you can use -f switch. The -d switch is used here to run the jobs in the foreground.

In this article, we have discussed cron and anacron and how to use them to schedule a job. We also did a comparison between them which will help you to choose the one based on your job requirements and system availability period.

Both Cron and Anacron allow you to run scheduled jobs. However, they work in very difference manners. We hope this helps you decide which job scheduling mechanism is right for you. See the resources section below for further reading.

How to Mount Google Drive in Linux