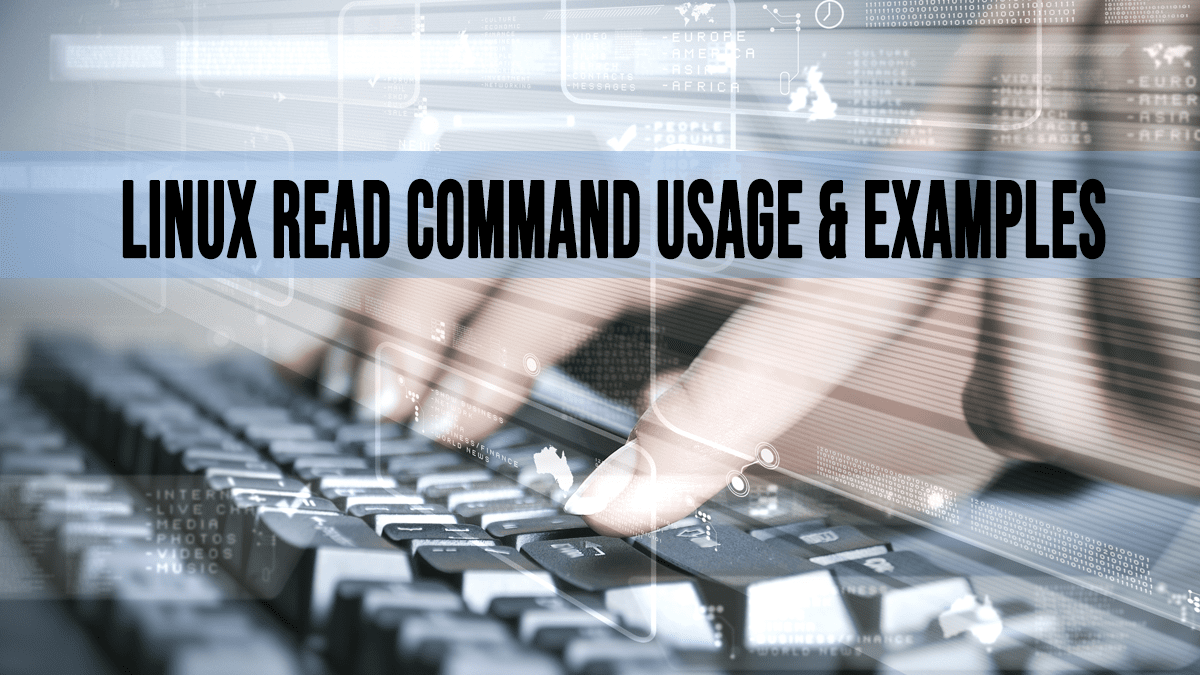 The Linux read command is a bash builtin that is typically used to accept user input in a shell script. You can assign that input to a variable to be used for processing. There is however, a lot more to the read command. In this article we will take an in-depth look at the read command, it's options and show you some examples of it's usage.

Basic Usage of the Read Command

By default the read command will take input from stdin (standard input) and store it in a variable called $REPLY. The default delimiter for read is a newline, so it will accept input until you hit the enter key.

Store Input in a Variable

Read always stored your input in a variable. As mentioned above it uses $REPLY for the default variable. If you want to store the input into a user defined variable, you can simply invoke the read command with a single argument. Instead of the default $REPLY variable, read will use the argument you supply. This comes in handy when writing a script that requires the user to input several different pieces of information.

The read command comes with the -p (prompt) option, which displays a prompt to allow user input. When using the prompt option it requires text as an argument. This can be a brief explanation of what kind of input you are expecting.

For example, if you were requesting that a user input their first name, it would like like this:

As mentioned above, the $REPLY variable stores the input to the read command by default. If you are using this in a script and asking for multiple inputs, you can specify a user defined variable. For example, if you wanted to store the users first name in the FNAME variable, simply add the variable name to the end of the command.

You can use the read commands -s (silent mode) option to allow people to enter sensitive data. This DOES NOT secure your information in anyway other than hiding the input on the terminal. Always take special considerations when dealing with passwords in plain text.

With that being said, passing the -s option will stop the characters from being echoed to stdout (standard output).

You can use -s (silent) as a lone option, you can pair it with the -p (prompt) option and you can also specify your own variable to store it in.

You can limit the number of characters entered by using the -n (nchars) option. If you reach the number specified it will automatically stop reading input.

As you can see in the example above, I attempted to input "okaydokay" but it automatically stopped when I hit 5 characters.

Additionally, you can use this in conjunction with the -p (prompt) option as well using a user specified variable.

By default the backslash acts as an escape character. If you have a backslash in your input and want it to be part of the line, you can use the -r option.

In this example we first use the backslash ( \ ) then enter (escaping the new line) as a line continuation and read accepts the rest of the input. Second, we use the -r option which takes this functionality away and uses the backslash as a literal character, not it's special meaning. So when we enter backslash + enter, it ends the input.

Advanced Usage of the read Command

In this section we will show you some more advanced uses for the Linux read command. We will touch on many concepts that will help with development of scripts.

Setting a Delimiter for Input

A newline terminates the input by default. We can set this to whatever we like. For example, we can set it to a pound/hash sign (#).

Setting a Timeout for User Input

By default read will just sit and wait for the user input. If you want to set a time limit on how long the user has to finish their input you can use the -t option. The timeout can be set in seconds, and if it expires without input it returns failure. In the following example we set the timeout for 5 seconds. The echo command shows the non-zero exit code, which indicates failure.

Creating an Array from User Input

To store the input into an array, we can use the -a (aname) option followed by the name of the array, like so:

This will take the input and split it into the array. Each word from the input is assigned as a value in the array, starting with 0. We can enter the values for the array separated by a space, hitting the enter key to denote the end of input.

Here is an example of putting names of animals into the ANIMALS array:

Now let's try to echo ANIMALS like we did earlier.

It only printed "dog" which is the first value in the array. This is because unlike using a variable, the values in an array were split at the spaces. In order to print all the values in the ANIMAL, we have to let bash know we are using an array, not a variable.

So dog is 0 in the animals array, cat is 1, and so on. We can print whichever value we like from the array using these numeric assignments.

NOTE: The full use of arrays is outside the scope of this tutorial.

Rare Options of the read Command

There are a couple options that are rarely used, but we will touch on them for completeness.

Using the -e option allows you to use readline editing in the input. The readline provides functionality to allow your to move the cursor, delete words, delete from cursor to end of line, and a lot more.

Often during an interactive session you type in a long line of text, only to notice that the first word on the line is misspelled. The Readline library gives you a set of commands for manipulating the text as you type it in, allowing you to just fix your typo, and not forcing you to retype the majority of the line.

Explaining readline is outside the scope of this tutorial, you can find links to more information below in the resources section.

If you are using Readline ( -e ) then passing the -i option will insert text into the editing buffer. Here is an example:

I think we covered everything there is to cover about the read command. We discussed storing input in variables, prompting for user input, creating arrays and a lot more. The read command is a great tool for all you DevOp folks out there.

Sound off in the comments below and let me know how you use the read command.