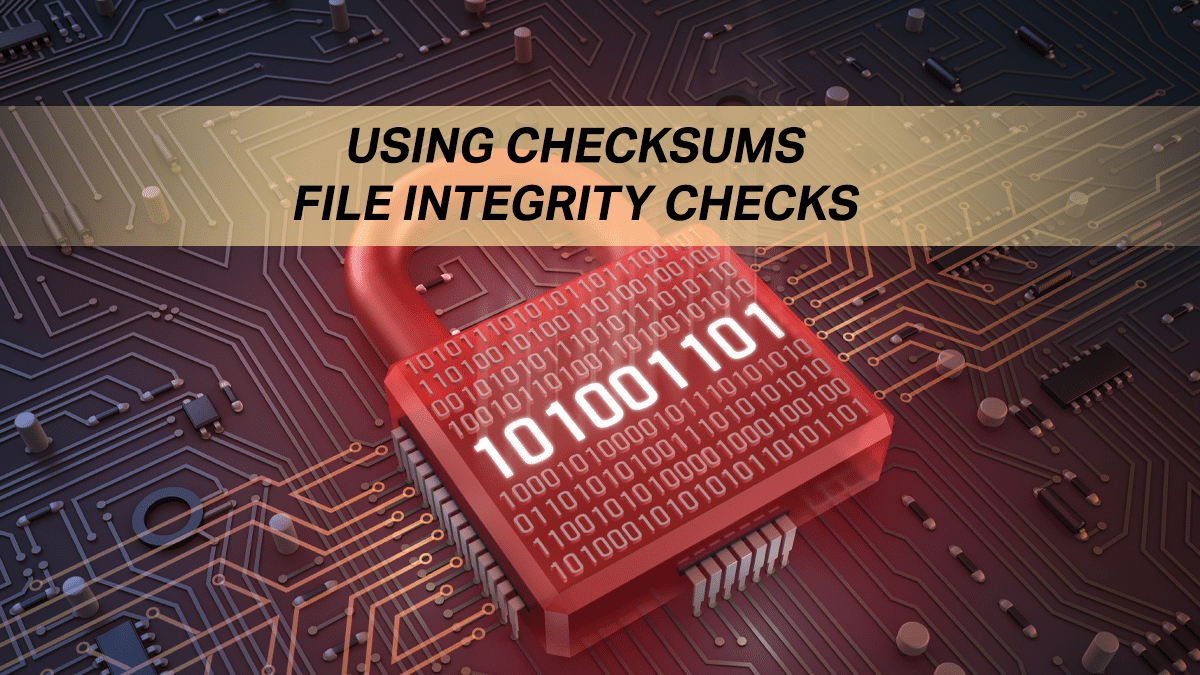 A checksum is a string of characters and numbers generated by running a cryptographic hash function against a file. You can use this output, or checksum, to verify that a file is genuine, error free and has not been changed from it's original source.

A checksum is a small-sized datum derived from a block of digital data for the purpose of detecting errors that may have been introduced during its transmission or storage.

The most popular Linux command to create a checksum from a file is the md5sum command. The md5sum uses the MD5 message-digest algorithm to produce a 128-bit hash value from the contents of a file.

Here is an example. Let's take the string "putorius" and generate a checksum from it.

The long string of characters above is the checksum. It is followed by a dash, which in this case stands for standard input (STDIN). If you were running a checksum against a file, the name would be listed instead of a dash. Now, let's change the input string slightly by capitalizing the letter P.

As you can see, md5sum generated a completely different checksum, even with a simple change.

Running a Checksum on a File

To run a checksum on a file is simple. Just evoke md5sum followed by the name of the file.

Here we generated a checksum of a text file containing all 185 lines of the short story Harrison Bergeron by Kurt Vonnegut. If we edit the file and change one character, the checksum will change. Let's change one random letter G in the file to a letter R and run the checksum again.

Even though we only made a very small change in the file, the checksum is dramatically different. This allows you to easily notice that the file has changed.

In depth analysis of hashing algorithms is beyond the scope of this tutorial. However, it is important to know that not all algorithms are created equally. For example, MD5 has well documented weaknesses (more info in the resources and links section below). The GNU Core Utilities package that provides the md5sum utility also offers utilities that offer different algorithms and higher bit hash values. The following utilities all work the same way (or very similar) and should be available on any Linux system.

SHA-256 (sha256sum) and SHA-512 (sha512sum) are recommended for most applications and generally considered secure. For instance, CentOS and Kali Linux both require the use of sha256sum to check the integrity of it's ISO files.

A common use for a checksum is verifying the a downloaded file. For example, let's say you wanted to install the latest Kali Linux. When you get to the Kali downloads page you will notice they provide a SHA-256 checksum for each file.

Once you have the file downloaded, you check check the integrity of the file by running sha256sum and comparing the results with the hash on the website.

If the strings match, you file has downloaded successfully and has not been altered since the folks at Kali created the checksum.

Checking the integrity of a file is an important step in ensuring a secure system. Specifically when downloading files from the internet. In this article we discussed how to generate a checksum and how to use it for a file integrity check. Now that you know how to use them, you should read up on hashing algorithms.

Find Command - Search for files on the Linux Command Line